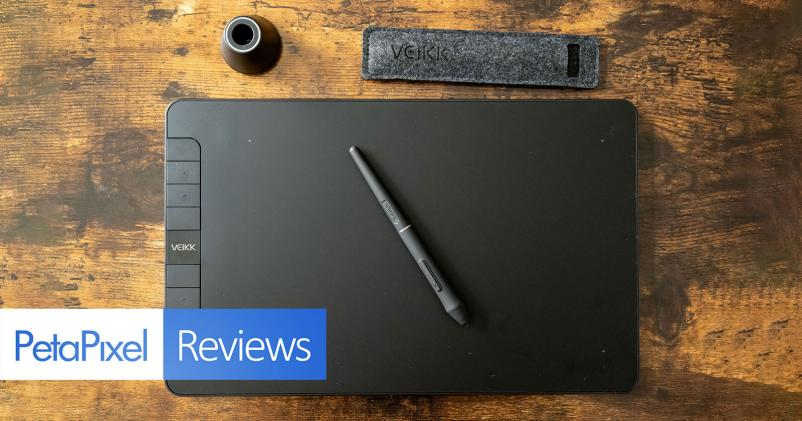 When it comes to precision and professional image editing, nearly every working retoucher will tell you that a pen tablet is an absolute must-have tool, yet the entry cost of these tools can be a deterrent. Thankfully there are several entry-level tablets like the Veikk VK1060 that offer some professional-level features without breaking the bank.

While tablets from Wacom have been an industry standard for what feels like forever, the recent flood of new tablet brands has made deciding on which one is the right choice for you more difficult. The good news is many of these tablets are incredibly affordable, meaning it is possible to test out some entry-level tablets for your editing at a cost cheaper than an average DoorDash delivery.

But why use a tablet in the first place? For most, it is because using one ties back to the pen and paper, which feels more natural for most graphic artists. On top of this, the sensitivity and pressure settings on the pen, paired with the freedom of movement using a stylus instead of a mouse or trackpad, allow for much more precise changes. This can be critical when you’re working on fine details like dodging, burning, clone stamping, healing, and drawing or painting on a photo. While some say there is a significant learning curve to moving to a tablet, most editors who do successfully transition rarely go back to a trackpad or mouse and keyboard. 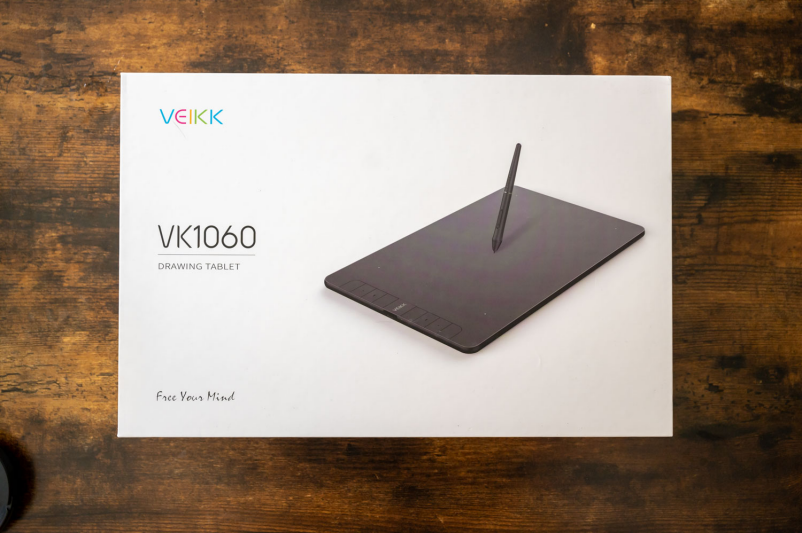 This is why the new tablets from Veikk are so interesting. The company offers a variety of tablets from small to large — including graphics display types — at a fraction of the cost of many of the competitors. The VK1060 is shockingly cheap at $50, and while these kinds of low-cost items are great to learn on, we were curious to see if this one could actually stand up and compete with those that are considered the best for professional photo editing that cost a lot more.

Out of the box, one of the first things you see is a “smudge glove” so your hands won’t stick to the tablet surface when using it, which is handy for people who want to extend the life of their products as long as possible. The tablet itself connects via a USB-C cable and is roughly the same size as a Wacom Intuos Pro (small), weighs a little less, and has a rather large surface area available to work.

The Veikk VK1060 features a clean matte surface that feels kind of similar to a sheet of high-quality paper. It also comes loaded with eight customizable express keys that you can set for general usage and your most-used tools/key commands to keep keyboard use to a minimum while working. The reverse side of the tablet features four rubber feet to help keep it secure on most desks/tabletops to avoid any slips and shakes while editing. 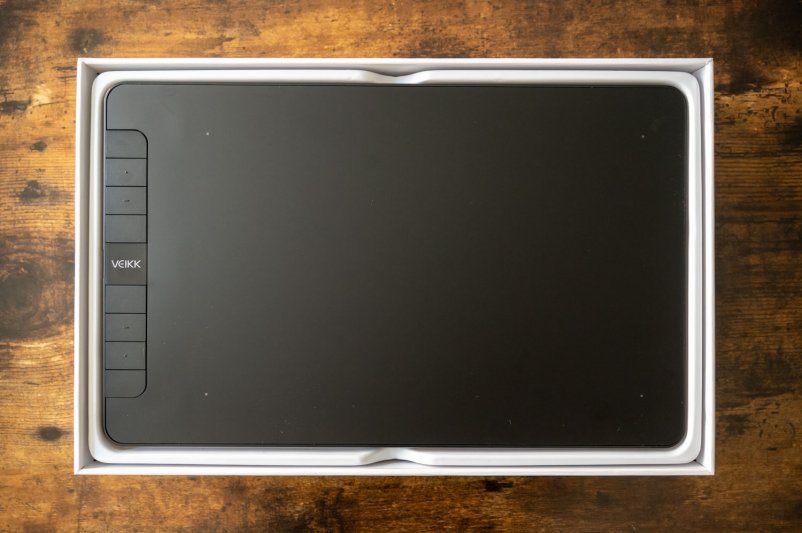 Also in the box are a bevy of other accessories including the USB cable, adapters to connect to Android smartphones and tablets, a nib-removal-tool, the pen with a soft pouch to carry it in, the pen stand (loaded with extra nibs), a cleaning cloth, and a a quick start guide and a postcard with the driver download instructions. 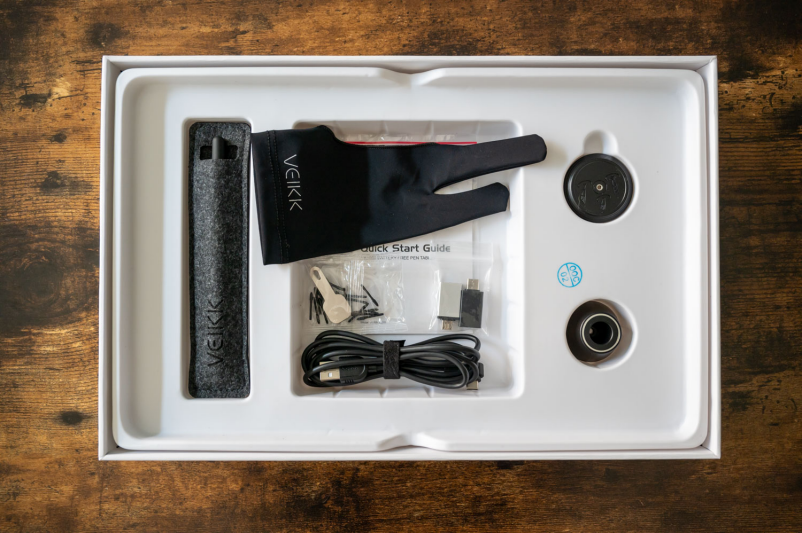 The VK1060 pen tablet is noticeably lighter than some other similar-sized tablets I’ve used over the last few years, yet it is still impressively rigid and durable feeling with very little give when I tried to twist or bend it. By default, the USB-C connection is on the left-hand side of the tablet in the middle point between the eight programmable express keys, yet the tablet can be set up to be used right or left-handed, and can even be set up to operate vertically to mimic a smartphone or tablet, which is especially handy when using it connected to an Android device with the supplied adapters. The face of the tablet features four LED lights that denote the available surface area the tablet has to offer. Through the use of Veikk’s software, you can adjust the scale of this working area to sit in pretty much any square or rectangular shaped area, allowing you to leverage the entire surface — which would be great for artists, illustrators, and designers who use long and broad strokes in their work — or you can reduce the size to a very small portion. This latter configuration is ideal for retouchers who use a lot of repetitive motions, thus keeping the amount of movement to a minimum effectively reducing fatigue and generally making photo retouching easier. 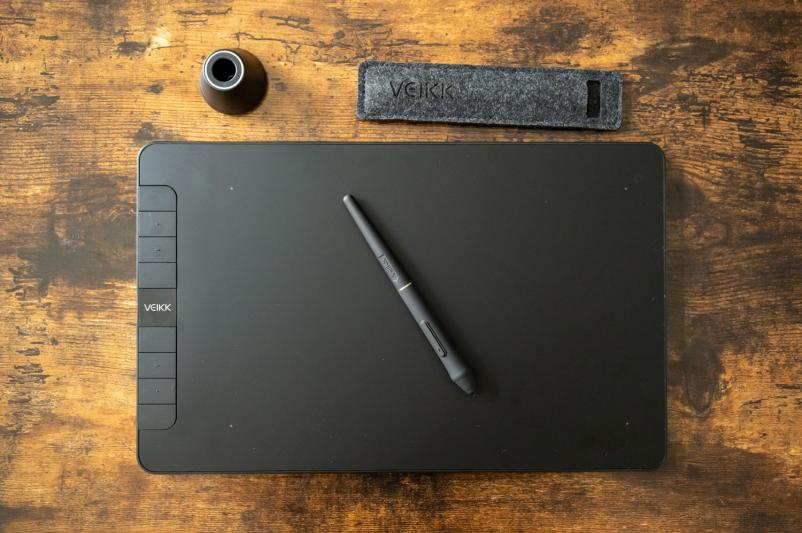 While this may change over time, during the review period, the plastics of the VK1060 seem to be a little more resistant to scuffs and smudges than some of the other tablets I have tested, and that might be due to the Veikk’s choice to make the drawing area the same material as the rest of the surface. Technically speaking, the VK1060 tablet offers a 10 by 6 inch working area with 8,192 levels of pen pressure with a 250 report rate (PPS) that supports pen tilt.

The pen itself comes shipped inside of a little soft pouch and I found it to be pretty responsive. It actually feels good in the hand as well. It’s very well balanced, smooth, and features the pressure-sensitive nib along with two customizable buttons that can be set to a variety of options based on your preference. 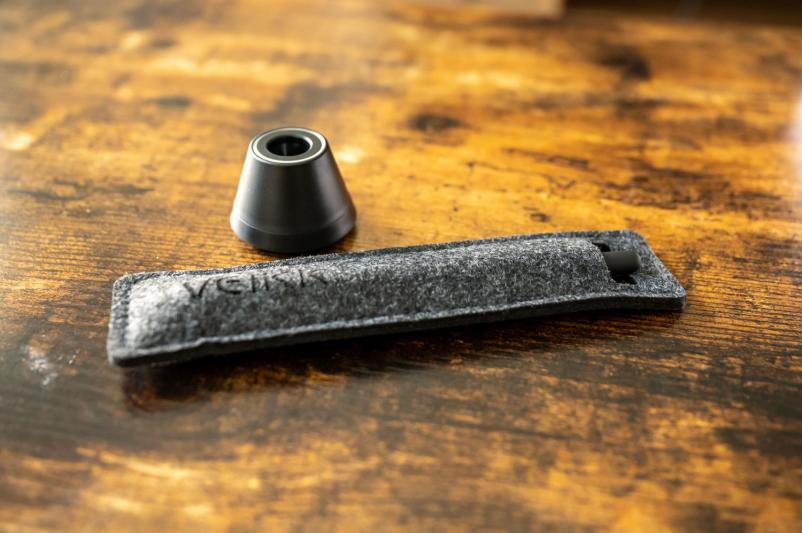 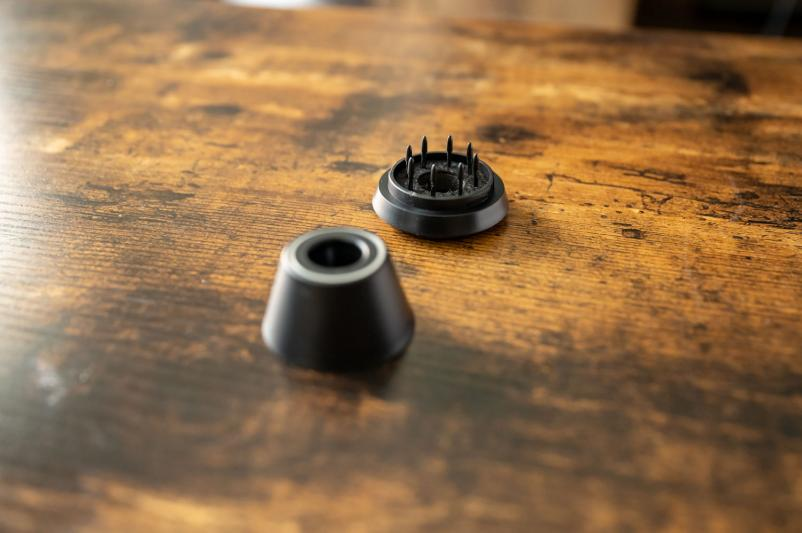 The base stand for the pen will feel familiar to Wacom users as it is very similarly designed, including the twist-off top that hides the spare nibs should the one you’re using wear out and need replacing. 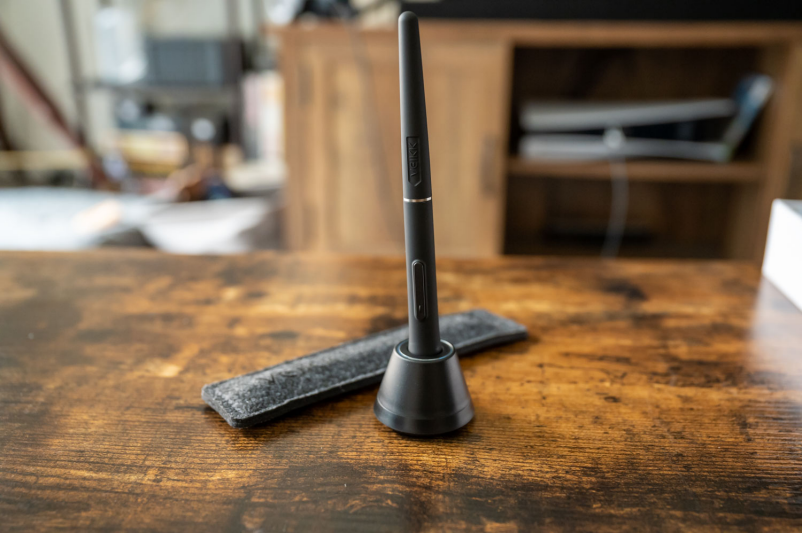 Like most pen tablets, the settings for the Veikk VK1060 can be completely customized to accommodate specific needs, from graphic design to just general Operating System usage. The driver install is rather straightforward and easy.

Once installed, the settings can be found inside the System Preferences (on Mac) under the VEIKK Tablet button where you can then customize the pen pressure sensitivity, the pen buttons, the express buttons, and the mapping of the working area of the screen versus the tablet. 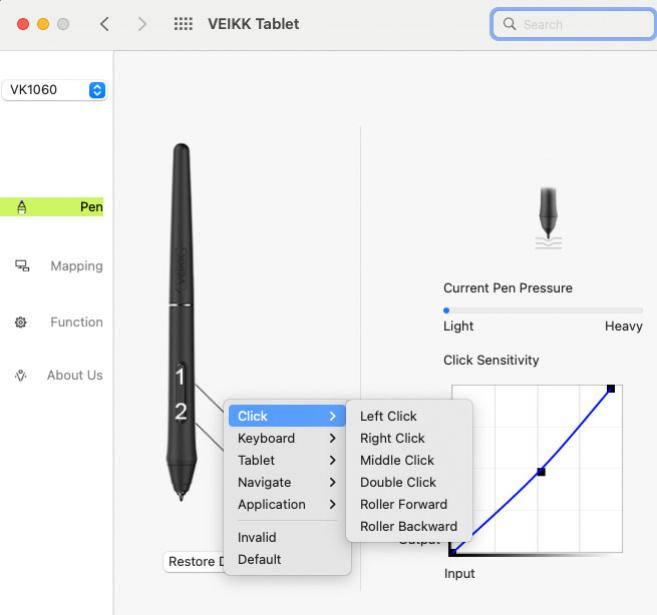 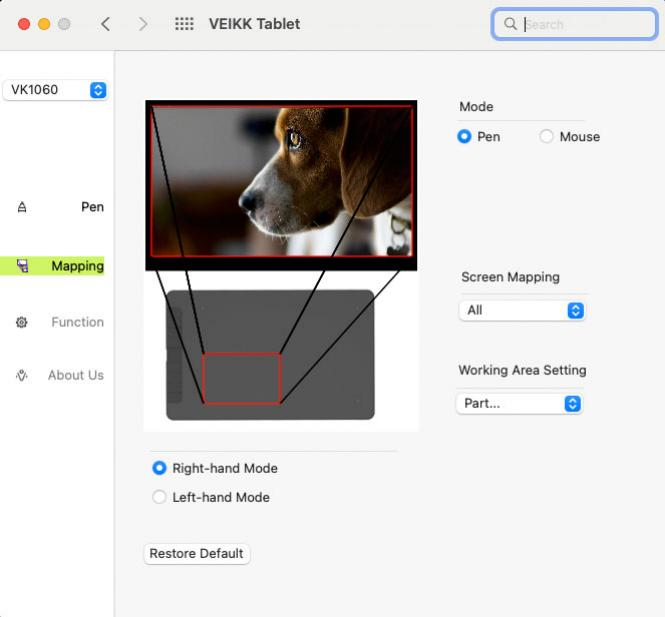 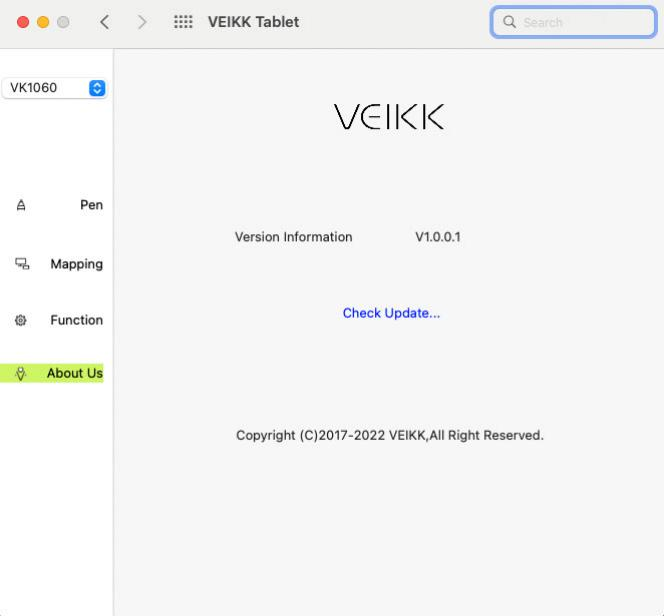 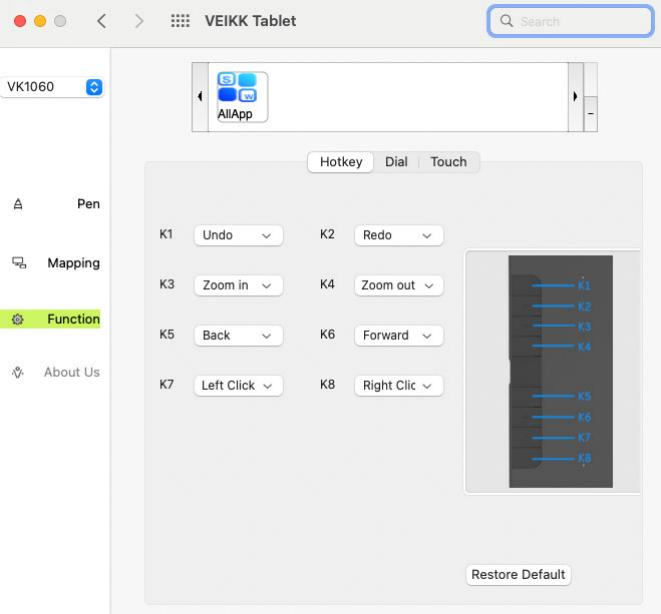 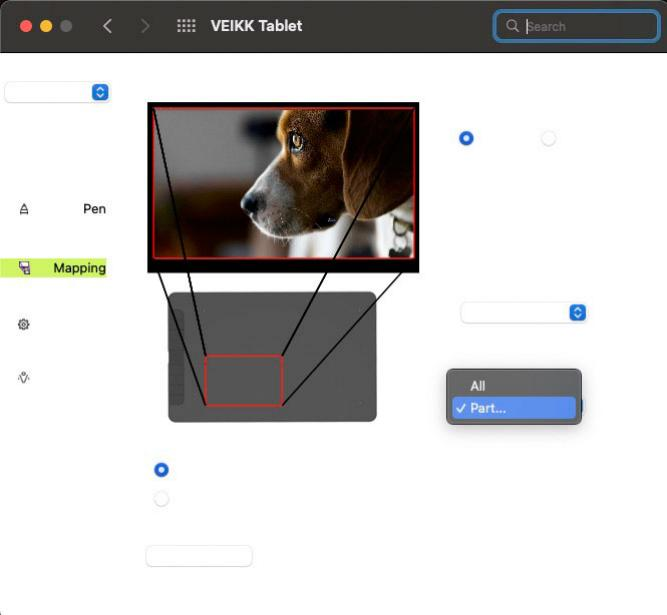 Pen Pressure and Using the Tablet

Using the pen to draw and retouch felt pretty familiar and anyone who has ever used a Wacom or other tablet will feel right at home with this stylus. For a tablet that is available for a fraction of the price, that’s high praise.

For the majority of my testing, I focused on using the pen and tablet within Lightroom and Photoshop, which included mostly small movements and in that scenario, I really didn’t notice any issues at all. In fact, unless I actually had to do some large-scale drawing or brush strokes, there was next to no difference between the tablet behavior when using the Wacom or the VK1060. Below is an image that was retouched using the Veikk tablet including some basic frequency separation as well as dodging and burning. 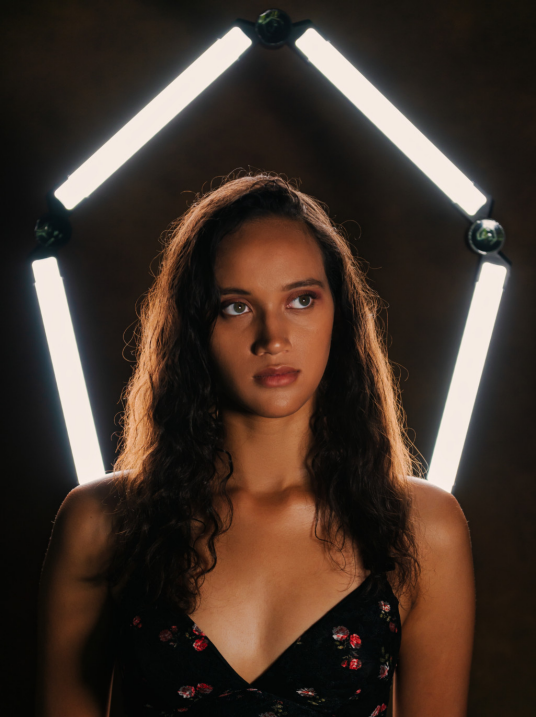 You can’t blame me for having reservations about a tablet as cheap as the Veikk VK1060, and before I started the review I did not think there was any way it could possibly be as good as a Wacom Intuos. Color me surprised, then, when I found that the VK1060 was actually surprisingly easy to use and provided pleasing results, at least as far as a photo retoucher would be concerned. While yes, there can sometimes be a bit of input lag that caused some jitters in the larger and slower brush strokes, for what I and most other retouchers would actually use the tablet for, the Veikk system holds up incredibly well.

Overall the VK1060 Pen Tablet is comfortable to work with, performs actually better than I expected with Photoshop and Lightroom, is small and easily transportable when on the move, and is cheap enough at $50 that if it happens to get lost on a plane or hotel conference room, I definitely won’t feel stressed about having to replace it.

Veikk’s success here adds to the pile of great options by an expanding number of competitors to Wacom, which makes me wonder if Wacom is still worth it.

There are a lot of alternatives in the tablet market, and most are from names you probably recognize. These tablets are not the only affordable third-party alternatives in the game, but they are among some of the best with prices ranging from $40 to $350: the Wacom Intuos that runs $149, and the .

The $40 Wacom One is the closest in price to the Veikk VK1060, but you lose out on some features — like the on-tablet buttons — found on Veikk’s option.

Should You Buy It

As far as retouching for photography is concerned, the tablet actually performed above expectations and offers more professional features than much of the competition at a significantly lower price.