The Best Drawing Tablets for Photo Editing in 2022

Anyone who has spent any extended time editing photos with a mouse will find that often, it’s just not the best experience. That’s why so many editors switch to a drawing tablet (also known as a pen tablet), but picking the best one has gotten surprisingly challenging in recent years.

That’s because since there are so many different makes, models, and brands out there, finding the right drawing tablet for you can be confusing and overwhelming.

It is crazy to think that even just a few years ago, the choice of tablet you worked on was pretty limited to only one or two brands since so few were making them. Today, there is a much larger pool of tools to choose from ranging from incredibly budget friendly for beginners, to wildly expensive and insanely powerful for the working professional. No matter what level of experience and features you need, we’ve put together a list of some of the best pen and graphic tablets for photographers in 2022.

Why use a tablet? Basically, they simply behave like the classic “pen on paper” which allows for incredibly natural motions that are much more accurate and comfortable for an editor than using a mouse or trackpad. These tablets are often far more sensitive than anything a mouse or trackpad can offer, with the best models offering high accuracy, tilt recognition, and thousands of distinct levels of pressure, which can be incredibly important for graphic design, typography, and photo retouching.

While they may take a little bit of time and practice to get used to, pen tablets will make long days in front of a computer far easier and faster for retouchers and editors. This means the only choice is to figure out the size, features, and budget that meets their needs.

What We’re Looking For

There are a lot of factors to consider when looking into a pen or display tablet for retouching. These include Pressure Sensitivity that allows users to truly capture how hard or soft you are holding and pressing the pen against the tablet in order to recreate the same behavior as if you were pressing a paintbrush or marker harder on a paper’s surface. While it may not be critical to photo retouching, it is incredibly important for designers and illustrators, but still translates into things like applying a mask and changing the intensity of an effect.

Customizable buttons and dials add more control for each individual user to allow them to program their most used commands into them, allowing for a much more distraction-free experience when editing. The addition of buttons, jog dials, and wheels allow users to zoom, scroll, and swap tools quickly without having to go back to their keyboards, keeping their eyes on the task at hand.

Accuracy is among the most important feature in any tablet. The best of them will react to the users as though they were drawing on a pen and paper (or paint brush and canvas), reacting to every single movement of your pen stroke, no matter how minute. Some cheaper tablets may not be as accurate or sensitive, which can translate to less-than-ideal pen strokes. This includes how much tilt the tablets can accommodate for also, as some cheaper tablets will lose connectivity with the pens if you have them angled too much.

Other features that are considered include the size of the tablet where most photo editors would prefer a smaller tablet and surface, making it easier to work in small details, as well as making it easier to travel with. Whereas designers and illustrators will want a much larger drawing surface so they can create in a more natural environment.

Connectivity options make a difference, too: Is it wired only? Can it connect via Bluetooth? Does it need an adapter or WiFi dongle? The more freedom a user has with their tablet (and longer battery life) the better it is received.

And finally, does it have a screen or not? As some retouchers and illustrators will prefer to see their pen strokes in real-time right under their pen tips. While not a necessity for photographers, there are some that truly prefer having a display in their tablets as it can also save them some valuable desk space, especially when working remotely. 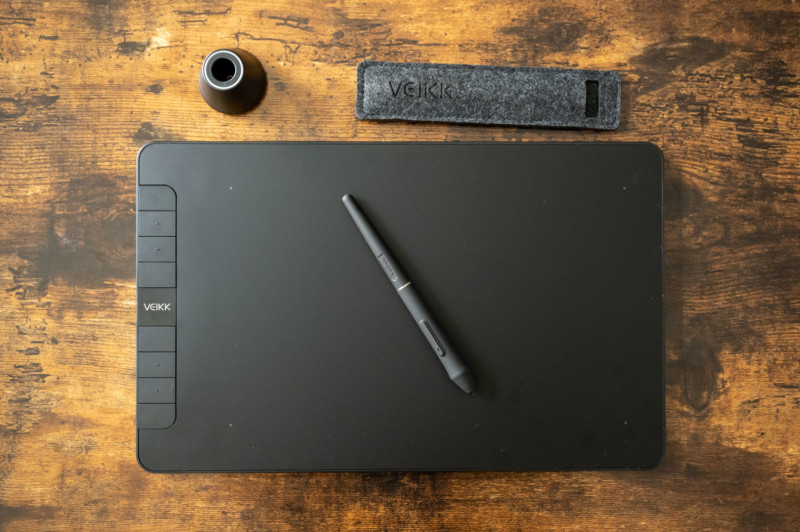 While many may assume the $50 Veikk VK1060 Pen Tablet can be passed over, this entry-level “wired-only” tablet is surprisingly good for its incredibly low cost. While it can’t compare to the professional-level models like the Xencelabs or Wacom Intuos Pro, for beginners, it doesn’t need to. The tablet offers a similar size drawing surface to the other “medium” tablets which makes it easy to travel with while providing a large enough area to both retouch and illustrate on with ease.

The Veikk VK1060 tablet offers a familiar 8,192 levels of pressure sensitivity as well as an impressive 60-degree tilt angle support which can accommodate most users’ everyday needs. In addition to this, the tablet comes equipped with 8 customizable buttons for a quick and streamlined workflow.

The Veikk VK1060 tablet performs far above any expectations a user would have to work with a $50 device, and it offers far more professional-level customization and tools than similarly priced tablets. The one thing to be wary of is the Veikk tablet may behave strangely if other tablet drivers are installed on the computer, so be sure to uninstall any other devices before using this entry-level one. 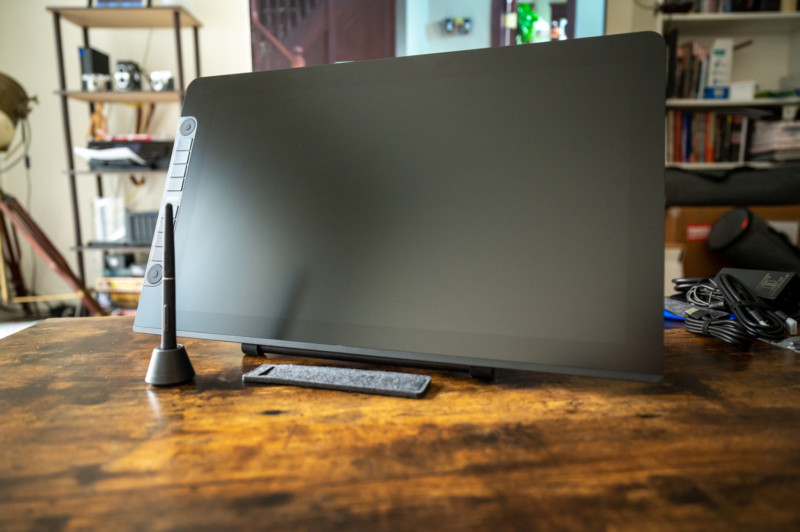 The influx of new brands of display and pen tablets in recent years means there are a much wider variety of Pro level display tablets at a surprisingly more affordable price point. The $389 VK2200 Pro Display tablet from Veikk is a fraction of the cost of nearly every other competing display tablet and offers a lot more punch than you would expect.

The tablet is designed with a “right-handed” use layout with eight customizable buttons and two programmable jog-dials along its left-hand side for users to set up with their most used tools and commands for easy and smooth workflow when in use. The company claims a maximum 1,920 by 1,080 resolution — but with my testing on multiple Apple devices, I was only able to get 1,600 by 900 — which may not be amazing but considering the size and cost of the device, it is a very fair trade-off.

The pen offers the familiar 8,192 levels of pressure sensitivity with a 60-degree tilt responsiveness for a realistic pen-on-paper feel when in use and unlike the entry-level devices Veikk offers, the Pro-level display tablet offers a very accurate pen-to-screen reactiveness. There were no jitters or lag to be found, as long as there were no other tablet drivers installed.

Given the low cost of this incredibly large display tablet, the expectations may be low, but the performance users will receive is high. For creatives looking to dip their toes in the water with a display tablet that is large enough to do more than just photo retouching (like full-blown illustration and drawing), the Veikk VK200 Pro display tablet is an incredible starting point that the users will not regret.